Congratulations to Dr. Allan Oolo , President of the ECDA , on winning first place in the individual category of the World Federation of Chiropractic’s Annual 2014 World Spine Day competition, over 40 countries worldwide belong to WFC.

The Estonian Chiropractic Doctors Association’s, Estonian World Spine Day campaign 2014, started on Oct. 13. and finished on Oct. 31. View our partners and sponsors , who helped us throughout the campaign. Click here!

Mission: ECDA’s mission is to provide support needed to preserve, protect, improve and promote the Chiropractic profession and the services of the regulated and properly qualified physicians who practice chiropractic medicine in Estonia.

Patient’s rights will also protected by the implementation of regulations governing the standards and ethics of these chiropractic doctors in Estonia. The purpose of the ECDA is to provide a positive vision for chiropractic physicians as well as leadership in Chiropractic health care and it’s natural approach to health and wellness. On behalf of Estonian chiropractic doctors and the profession, ECDA accomplishes it’s mission and purpose by affecting public policy and legislation, by promoting high standards in professional ethics and quality of treatment and by carrying out a dynamic strategic plan to help ensure professional growth. Members are also kept abreast of local and international 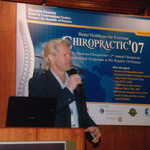 developments in the Chiropractic medicine field through internet communication. From an educational perspective, ECDA intends to hold educational seminars and conference symposiums for its members. In order to protect the public from unqualified or inappropriate practices, the ECDA has been in talks to create a national Chiropractic Examining Board which seeks to accomplish it’s stated mission and purpose by qualifying professional chiropractic registrants and by regulating the standards and ethics of the Chiropractic profession in Estonia in conjunction with the
Estonian Health and Social Affairs Ministry. The ECDA with partners and sponsors also organize chiropractic educational campaigns for the public and medical profession, as well as domestic and international exhibitions and trade-shows which relate to the chiropractic and complimentary medical healthcare fields.